By Stephanie Linning For Mailonline

It is one of the most hotly anticipated TV events of the year - and the Succession series 3 premiere does not disappoint, according to rave reviews from viewers and critics.

The critically-acclaimed drama returned to the US at 9pm on Sunday night, in what fans dubbed 'Succession Sunday', while committed British viewers set their alarms for 2am to watch the premiere simultaneously on Sky Atlantic.

The episode, which receives its primetime UK premiere on Sky Atlantic at 9pm tonight, is now available to stream via HBO Max in the US, and NowTV and Sky in the UK.

Season 3 deals with the aftermath of the explosive end of season 2, when Kendall Roy (Jeremy Strong) knifed his father Logan (Brian Cox) in the back by publicly declaring his involvement in various scandals.

The family is still reeling from the mutinous strike, while Logan is trying to work out who he can trust to take temporary charge of the business as he flees overseas.

As MailOnline's TV critic Christopher Stevens writes in his five-star review: 'Logan's four children and the other characters – wives and ex-wives, rivals, henchmen – circle him like anxious jackals and vultures gathering to fight for scraps around a lion gorging on its prey.' 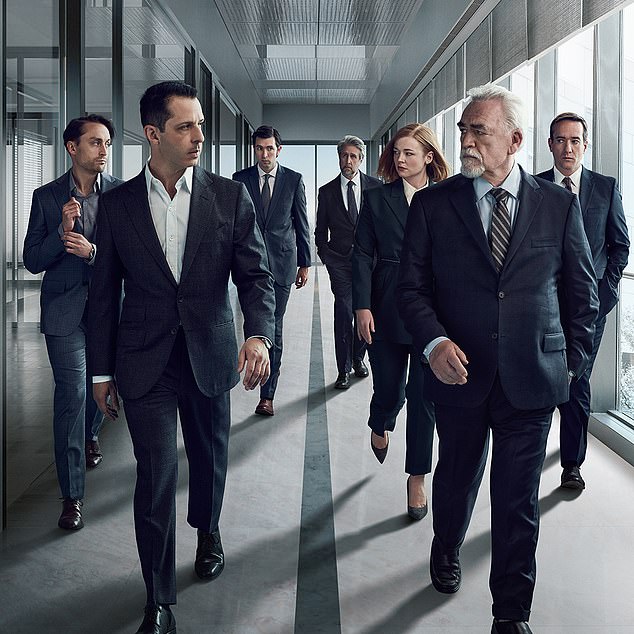 Succession returned to the US at 9pm on Sunday night, in what fans dubbed 'Succession Sunday', while committed British viewers set their alarms for 2am to watch the premiere simultaneously on Sky Atlantic. It will air again on Sky Atlantic at 9pm tonight

The razor-sharp return has been praised by TV critics and fans on both sides of the Atlantic, with CNN (top), the Daily Telegraph (middle) and the Guardian all giving it rave reviews

The razor-sharp return has been widely praised by TV critics on both sides of the Atlantic, with The Daily Telegraph, The Times and the Guardian hailing the 'immaculate' writing and 'unimpeachable' performances in five-star reviews.

CNN critic Brian Lowry writes: 'Success hasn't spoiled "Succession," as the Emmy-winning drama returns with all its Shakespearean and Murdochian overtones intact, with a bruising father-son battle over its fictional media empire'.

Philippa Snow of the Independent adds: 'After a terrible year, full of struggle and calamity and sickness, it is somehow still a pleasure to spend time with some of the worst and most narcissistic people ever written.'