ProPublica is a nonprofit newsroom that investigates abuses of power. Sign up to receive our biggest stories as soon as they’re published.

With so many critical health care products now made offshore that supplies could not meet surging demand as the coronavirus overwhelmed hospitals, America’s attention has again turned to the atrophied state of domestic manufacturing.

As imports from Chinese manufacturers vaporized and other countries clamped down on exports, health care workers improvised with homemade face masks while American factories retooled in a desperate race to make ventilators and protective equipment. It’s a pattern, it seemed, in which devices invented in the U.S. end up being produced overseas.

“Never again should we rely on the rest of the world for our essential medicines and countermeasures,” vowed President Donald Trump’s trade adviser, Peter Navarro, during a Coronavirus Task Force press briefing at the White House. Democratic New York Gov. Andrew Cuomo voiced similar frustration: “Long term, we have to figure out why we wound up in this situation where we don’t have the manufacturing capacity in this country.”

Help Us Continue Reporting on COVID-19

Are you a public health worker or front-line medical provider? Do you work for or with a government agency involved in the effort to protect the public? Have you or your family personally been affected? Show us what we should be covering or serve as an expert to make sure we’re on track.

Note: If you develop emergency warning signs for COVID-19, such as difficulty breathing or bluish lips, get medical attention immediately. The CDC has more information on what to do if you are sick.

I started reporting on the crisis in American manufacturing long before the coronavirus forced the issue onto center stage.

I wanted to understand what happened to America’s efforts to manufacture the lithium ion battery, a product that has become vital to the future of U.S. transportation. Lithium batteries now power not just a new generation of electric cars, but everything from cordless drills to personal drones. Utilities use them to store energy generated by windmills and solar panels. They even push air through the protective suits ordered recently by the Federal Emergency Management Agency to help New York hospital workers responding to COVID-19.

But the effort to establish a lithium battery manufacturing base in the U.S. largely failed, even after the Obama administration made it a keystone of its 2009 stimulus program, aiming to produce 40% of the world’s lithium ion batteries for advanced vehicles by 2015.

Deepening the wounds, a Chinese industrial conglomerate called Wanxiang paid only $256.6 million for A123’s assets in 2013. There was bipartisan outrage in Congress about the deal, but not enough to stop the sale. Wanxiang later bought Fisker too.

For automakers, battery technology still could not compete with gasoline engines. Nancy Gioia, who ran Ford Motor Company’s electrification initiatives, couldn’t use batteries for trucks and SUVs demanded by American drivers. “Battery-powered vehicles, at that time, that was a bridge too far,” Gioia said.

By 2015, instead of the million electric vehicles projected by the White House, with sales further depressed by low gas prices, only about 400,000 were on American roads.

The federal money had been irresistible, but it also led A123 to invest in manufacturing before enough customers existed for the product, said co-founder and former chief technology officer Bart Riley. “If you’re responding to something that’s artificial in the market, you do so at your peril,” Riley said.

“The White House thinks of this in terms of jobs,” said Moores, a managing director of the research firm Benchmark Mineral Intelligence. If developed, the full supply chain of battery manufacturing could create around 45,000 jobs, he said. The bigger stakes were what America stood to forfeit.

“If the U.S. doesn’t get its own battery capacity, large scale and high quality, it’s going to lose its automotive industry in the next 50 years,” Moores said.

To be competitive, innovation and manufacturing must exist in a virtuous circle — with engineering improvements closely tied to factory production. For the moment, consumers still demand trucks and SUVs because gas is cheap and battery-powered vehicles come at a premium. But as the cost of batteries declines, that could shift quickly, before Detroit is ready for it.

Trump’s administration has urged companies to move their supply chains out of China. Trade adviser Navarro, a longtime critic of trade with China, has explicitly cited America’s lack of battery manufacturing as a national security threat because of the substantial military applications — ranging from portable radios to thermal imaging for surveillance. China also controls the raw materials used in advanced batteries. Lithium, the world’s lightest metal, is primarily mined in Chile and Australia and processed in China.

“We have virtually all of the battery production migrating elsewhere now,” Navarro said in a 2018 speech at a Washington think tank. “And we have the lithium that’s used for some of this is coming under the control of foreign powers.”

But so far, the administration’s efforts have either been small-scale or even counterproductive.

Take Trump’s trade war, which imposed a 15% tariff on lithium ion batteries coming from China starting in September 2019. (It’s since been cut in half.) Companies and associations — including the Korean company LG Chem and Tesla, the two biggest manufacturers of batteries in the U.S. — pleaded for exemptions with the Office of the U.S. Trade Representative because of the difficulty finding sources.

But the tariffs did not spur domestic production, said Cairn Energy Research Advisors analyst Sam Jaffe. “If you’re going to build a factory here to take advantage of that, how do you know it’s not going to disappear in six months?” Jaffe said. “It’s almost frozen people in their tracks.”

What would spur domestic production? According to experts I interviewed: More battery research investment, and policies that foster demand for electric vehicles, like tax incentives and strong emissions standards. That’s because regardless of tariffs, global supply chains have been contracting for years. Heavy goods especially now tend to be assembled closer to where they’re going to be sold, so if you want something to be made in your country, it makes sense to consume more of it.

Instead, Trump has enthusiastically supported fossil fuels. His Environmental Protection Agency is rolling back Obama-era vehicle fuel economy rules and fighting the extension of a $7,500 electric vehicle tax credit. Trump’s Bureau of Land Management has eased the way for lithium mining on public lands, but investors have been leery.

“The administration’s policy is that this is not a problem,” said David Hart, director of the Center for Science, Technology and Innovation Policy at George Mason’s Schar School of Policy and Government.

As his assistant secretary of the Office of Energy Efficiency and Renewable Energy, Trump installed Daniel Simmons, a former staffer at oil- and gas-friendly think tanks.

“People were really interested in what we were doing in the U.S.,” Jim Greenberger, executive director of the National Alliance for Advanced Technology Batteries, told me. “Now we’re irrelevant internationally.”

The Trump administration has made a few steps forward. In January, the Energy Department announced an “energy storage grand challenge” that will direct $158 million toward research and manufacturing improvements. And there have been glimmers of new investment in battery production, such as GM’s $2.3 billion partnership with LG Chem to produce batteries at its shuttered plant in Lordstown, Ohio. 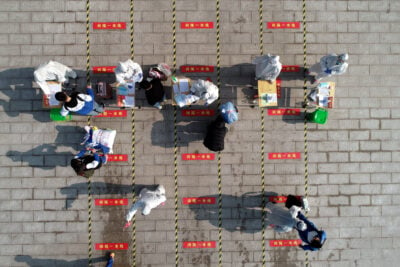 Coronavirus Advice From Abroad: 7 Lessons America’s Governors Should Not Ignore as They Reopen Their Economies

We spoke to frontline experts from around the globe and have compiled a list of recommendations for reopening U.S. states. Their consensus? It’s tough to find policies that simultaneously save lives and livelihoods.

But that pales in comparison to Europe and Asia, which are galloping ahead in electric vehicle adoption. Several European nations aim to phase out gas-powered vehicles entirely, for example, and the EU has a bloc-wide “strategic action plan” to ratchet up emissions standards and spend more than $3.5 billion on advanced battery research. China established electric vehicle production targets and requires automakers to buy batteries domestically.

Kota, the former White House advanced manufacturing chief now at the University of Michigan, advocates a new policy that would require spending at least 5% of America’s $150 billion annual science budget on research that turns laboratory breakthroughs into commercially viable products. The government should support startups by buying their products, and companies benefiting from government-subsidized research should be required to manufacture them mostly in the U.S., he said.

But the problem isn’t only with government policy. In contrast to the patient, long-term view of investors in countries like Japan and South Korea, America’s fast-churning capital markets tend to abandon companies that don’t grow quickly enough. To fill that gap, Kota thinks governments should raise money for publicly managed, privately financed venture funds.

“When it comes to scale-up, that shouldn’t be the government’s responsibility,” Kota told me. “Because then you’ll be establishing A123.”

After A123’s bankruptcy, company executives assured the Department of Energy that the new Chinese owners would maintain production in Michigan.

“They are historically a hands-off owner, retain U.S. management, preserve U.S. jobs provided financial targets are met, and on several occasions have exported product from U.S. divisions to their Chinese customers,” senior technical director Mike Wixom wrote, according to documents reviewed by ProPublica.

To Perry Seay, the Chinese company’s U.S. manufacturing operations never made much sense, given how few electric cars Americans were buying. “We were trying to sell to people here in the U.S., but nobody wanted it,” Seay said. And batteries are heavy — it’s hard to compete on cost when you’re shipping overseas.

In 2019, A123 announced it would close its factories and consolidate its engineering personnel in Novi, Michigan. The federal Department of Labor approved a petition for trade adjustment assistance, which is granted when jobs are moved offshore, to dozens of A123’s laid-off workers. A skeletal crew is doing cleanup at the Romulus plant, and when I visited, the parking lot was almost empty, the chargers ripped out of several spaces reserved for electric cars.

The quiet town has likely felt more economic impact from a new Amazon fulfillment center than it ever did from A123. Tim Keyes, the city’s former development director, told me A123 management always kept its distance; he never heard back when he called to check in.

“They were a ghost tenant,” Keyes said, just taking up space that otherwise would’ve been on the town’s tax rolls. “I imagine the city is looking forward to them finally moving out.”