There’s an app for everything these days. But until now, the primary way to discover and try all those apps has stayed the same: visiting the App Store. In iOS 14 that’s changing in a significant way. No, you won’t be able to install apps from a third-party store like some companies are asking for, but apps are moving beyond the App Store in a different way thanks to App Clips.

App Clips are small pieces of apps designed to be discovered not in a digital store, but in real-world environments through NFC tags and QR codes. You can find and use App Clips in other places too, like Safari, but the real-world, on-the-go discovery methods are the most intriguing aspect here because of the convenience they promise.

We’ve likely all found ourselves in a situation where we need an app for a specific one-time use, but may or may not need the app again after that. One example when visiting somewhere new is the transaction of paying for parking. Without an App Clip, such a circumstance would mean searching for and downloading an app, then creating an account within the app, and entering your payment details all for the sake of completing this single, far-too-painful transaction. An App Clip would be perfect for that situation, as you could simply hold your iPhone up to an NFC tag, use Apple Pay to pay your parking toll, and be done. These kind of on-the-go situations are where App Clips really shine.

In Apple’s ideal world, you might find an App Clip at every table inside a restaurant, which would enable self-ordering and self-payment. Museums would offer App Clips at prime exhibitions to help visitors engage in a new way with different artifacts. Bikes and scooters could be rented with a single tap of an NFC tag. Stores would use App Clips to offer quick access to online product listings so in-store shoppers could read reviews before they buy. Historic parks and other public spaces would employ App Clips for detailing the significance of a given monument or location. And more – Apple hopes adoption of App Clips will span not only examples like these, but all sorts of other creative uses the company hasn’t yet imagined.

App Clips will start arriving today with iOS 14’s debut. Here’s what to expect from them, and why they’re such a potentially transformative technology.

Behind the scenes every App Clip, no matter how you access it, is invoked via a URL. That URL loads a card that describes exactly what the App Clip will do if you use it and provides the option of opening it. App Clips must be less than 10MB so that whenever you tap that Open button the experience of loading the App Clip should feel immediate. 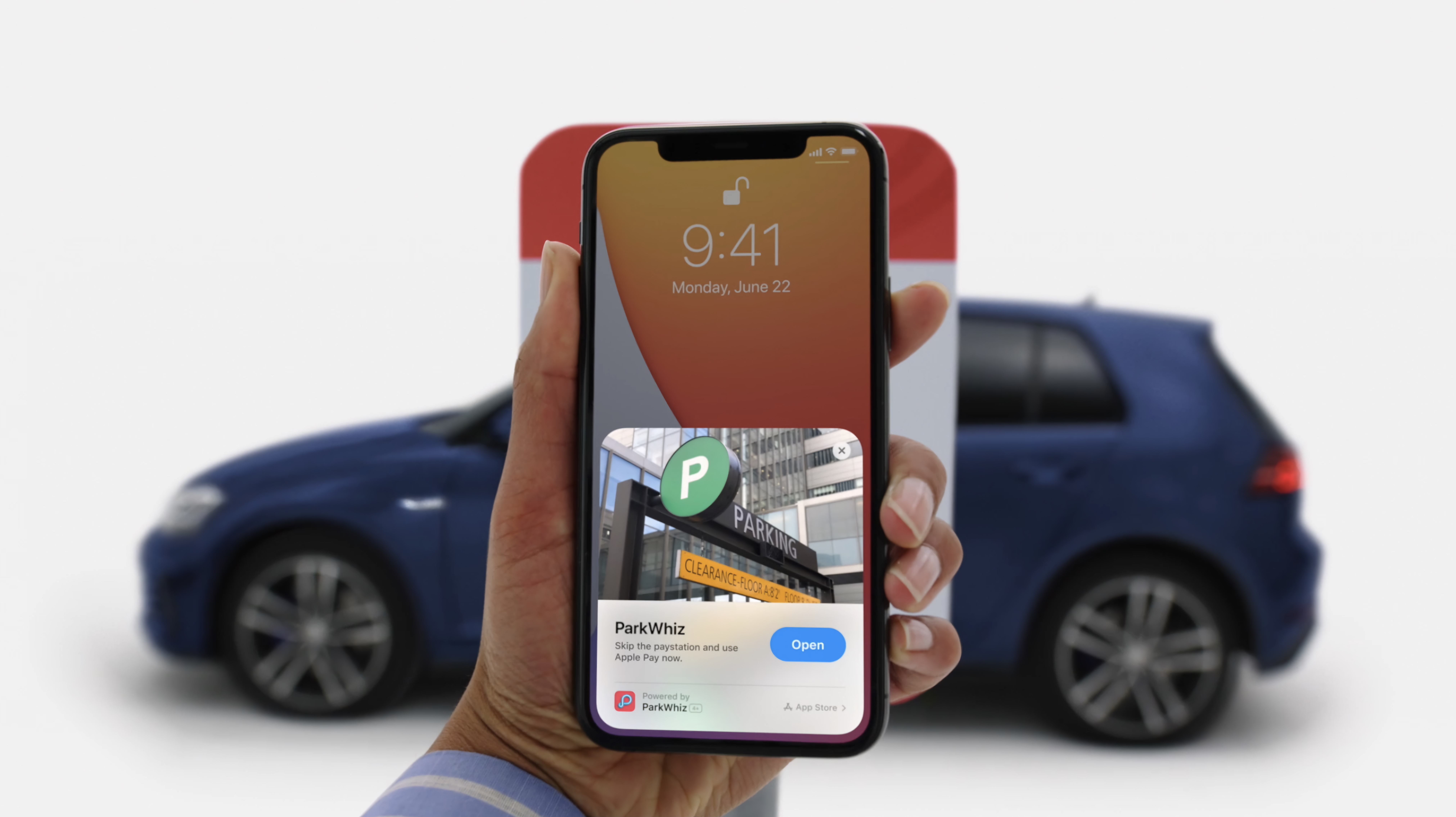 Paying for parking with an App Clip.

As I mentioned, there are a variety of ways to access App Clips. You can find them through:

Apple is also developing a proprietary physical tag called an App Clip Code, but it won’t be available until after the initial iOS 14 launch. App Clip Codes can either be tapped or scanned, combining the benefits of both NFC and QR. They also carry a distinct design, such that if you see an App Clip Code you’ll know there’s an App Clip available to access there; standard NFC tags or QR codes, on the other hand, need additional verbiage explaining they contain App Clips otherwise users wouldn’t know until they tried them. 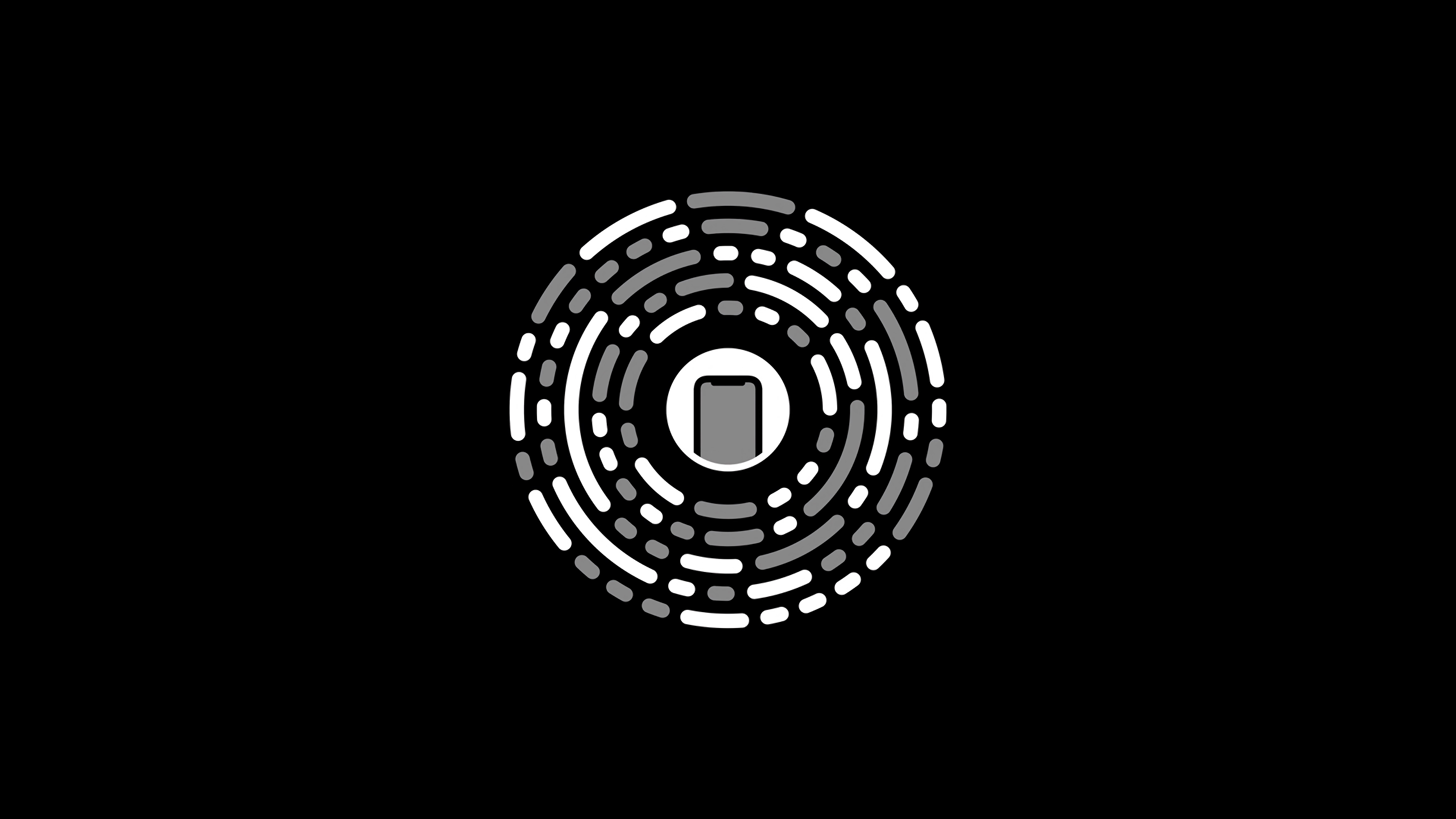 The new App Clip Code that Apple will make available to businesses and developers later this year. 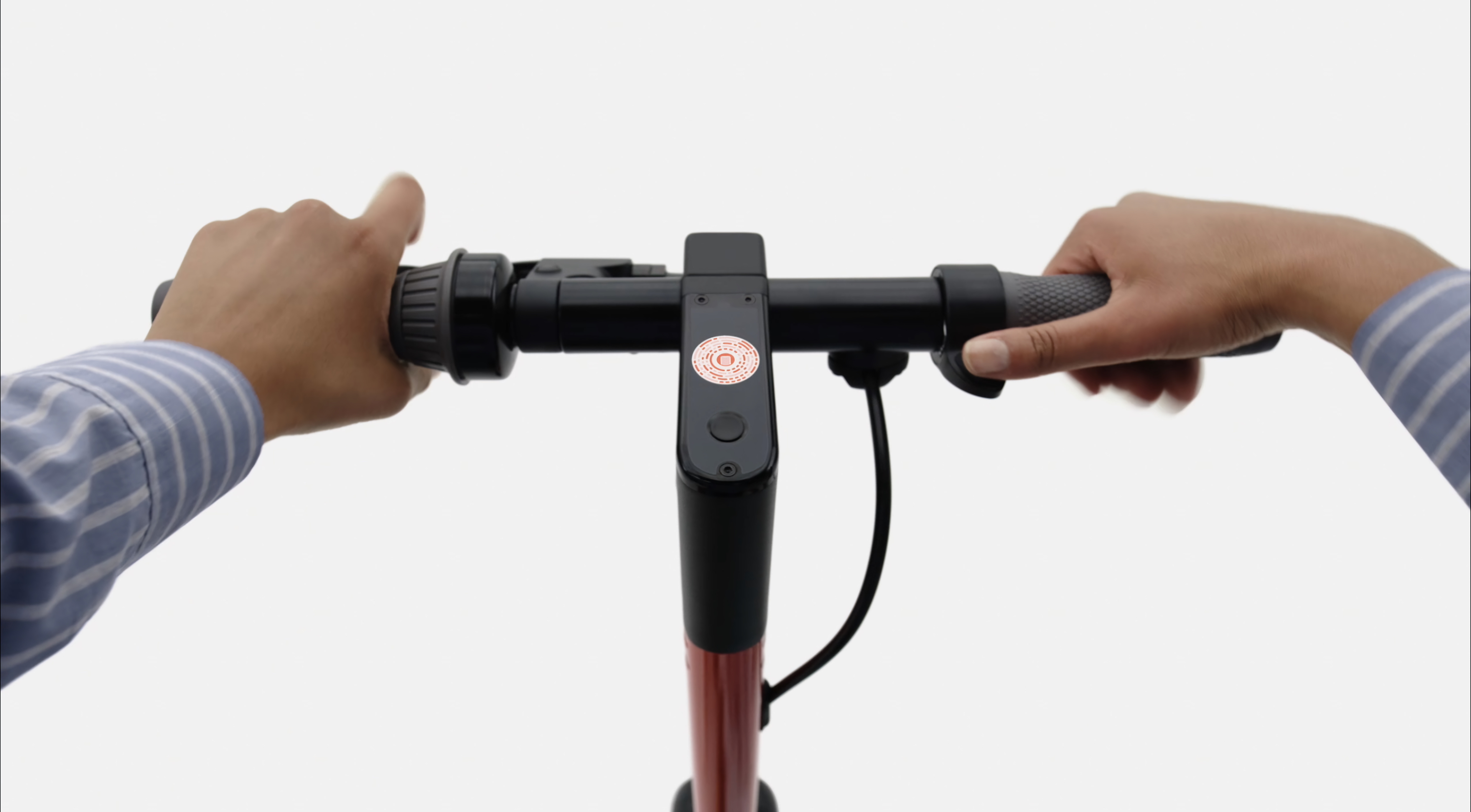 App Clips can only be created by developers who have a full app already, because they’re essentially mini-versions of that app that have been stripped down to include a limited set of functionality – though developers can still tap into the normal range of tools available when building full apps, and system options like Apple Pay and Sign In with Apple are encouraged where appropriate. The basic concept is to provide an experience tailored to the exact needs of a user at a given moment.

To explore this design ethos in practice, let’s use the Starbucks app as an example.

Starbucks’ app offers five different navigation tabs – Home, Scan, Order, Gift, and Offers – each of which contain a lot of functionality. That’s great for someone who’s well-versed using the full app, but throwing all those options in front of someone unfamiliar with the app wouldn’t be a good experience when they’re on-the-go and ready for coffee. Starbucks might want to create an App Clip that takes just the Order tab and strips it down to just the options that need to be there. 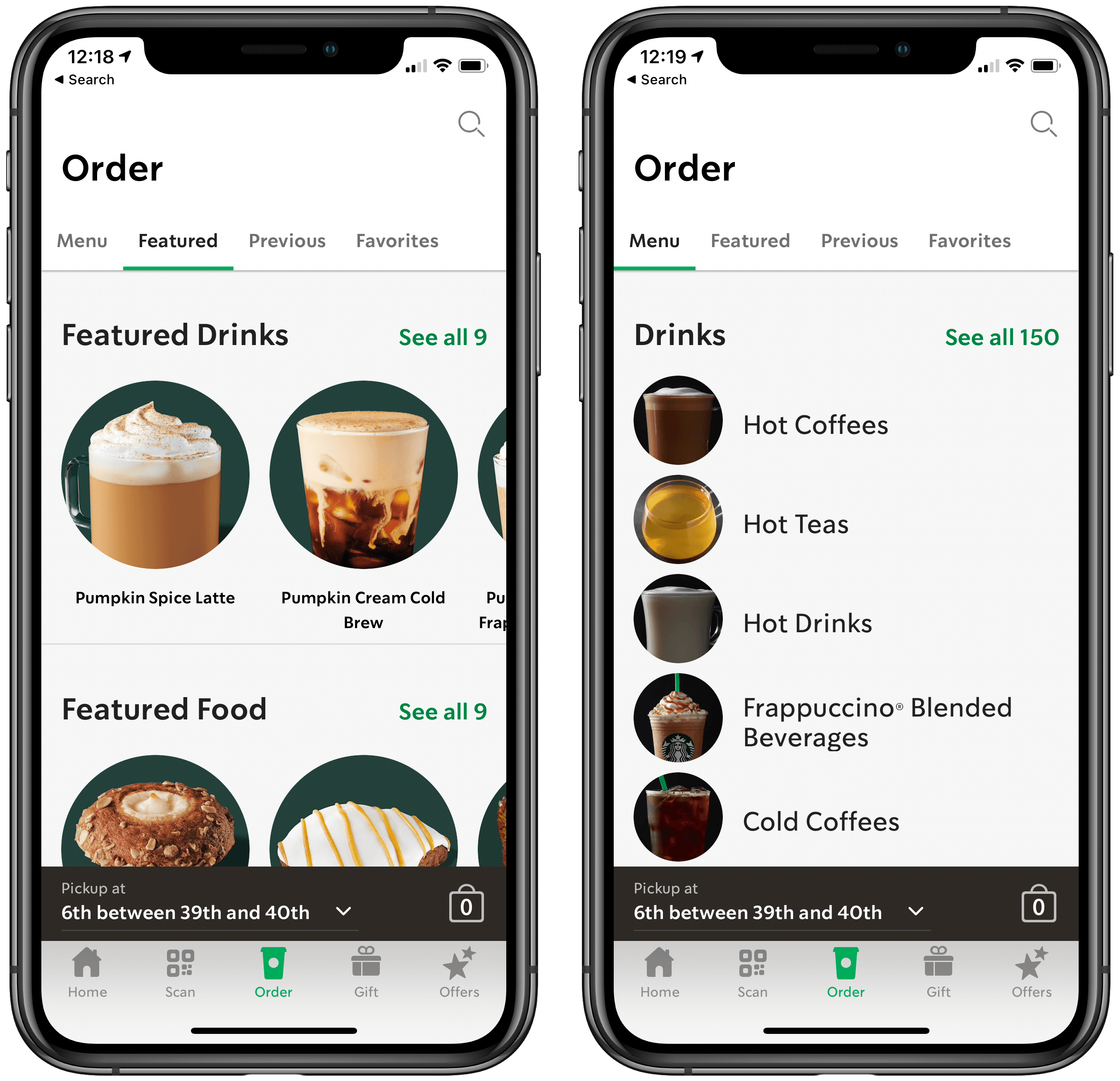 A portion of Starbucks’ Order tab would make a perfect App Clip.

Ideally, such an App Clip would be accessed via an NFC tag or QR code inside a given Starbucks location. If the App Clip is configured specifically for that location, there’s no need for users to then choose a pickup location for their order – if you interact with a physical tag in a specific location, you obviously want to order there. The App Clip wouldn’t need a Favorites section anymore either, since favoriting is better suited for the full app than a one-time transaction; the Previous section should be dropped for the same reason. All that would leave you with in the App Clip is featured items and a way to search and browse the full menu. These things could fit on a single screen and offer a simple, streamlined way for people on-the-go to place an order. After selecting their favorite drink and/or pastry, the user could pay using Apple Pay, and the entire transaction would be over in a matter of seconds. The App Clip could then present the option of downloading the full Starbucks app, telling the user they can earn rewards if they do so.

Apple wants developers to walk through this exact kind of thought experiment when it comes to building App Clips, considering use cases and drilling down to the bare minimum functionality needed for a given task. Everything extraneous has to go. App Clips’ 10 MB limit isn’t just for speedy downloads, it also serves a second purpose of forcing developers to thoughtfully and intentionally streamline the user experience.

I’ve tested App Clips that enable quickly logging water intake (WaterMinder), performing a breathing exercise (Unwind), and more. None that I’ve tried are designed for the on-the-go scenarios I’ve outlined, but they nonetheless demonstrate the principles of being lightweight and singularly-focused, and show the potential of such App Clips for aiding app adoption. ChibiStudio has an App Clip in beta, for example, that enables users to create their own chibi without needing to download the full app, eliminating a key barrier to entry. If that user enjoys the experience, they’re likely to download the full app afterward – something that can be done from ChibiStudio’s App Clip with a single tap after sharing or saving your chibi. 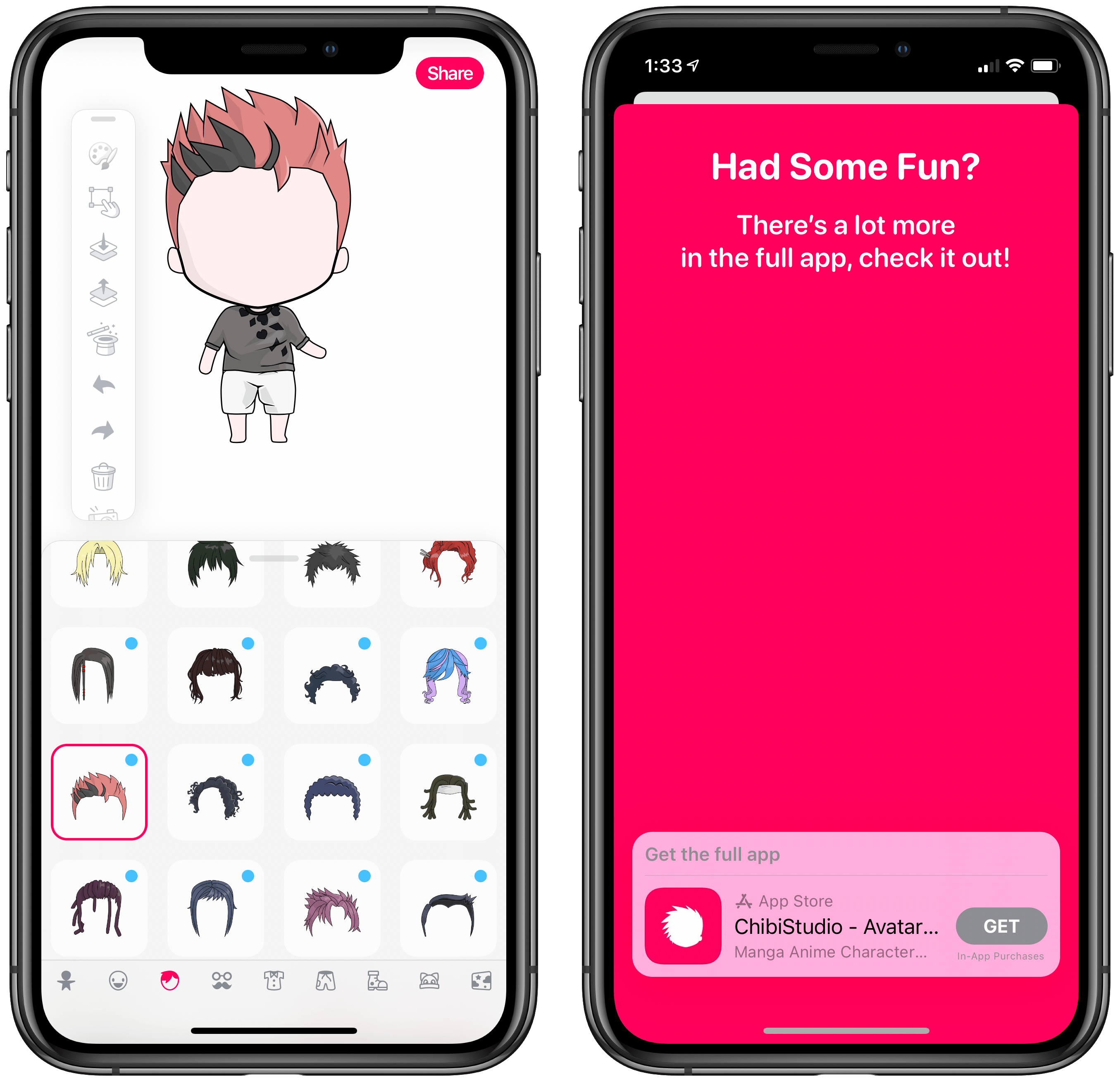 ChibiStudio’s App Clip lets you build and share your chibi (left) then provides the option of downloading the full app (right).

Even though ChibiStudio isn’t the type of app I expect to encounter an App Clip for out in the real world, it’s a great example of how App Clips can also function as a way to sample an app. From a developer’s standpoint, that’s really the main purpose of App Clips that are accessed via Safari or Messages – they offer users a chance to discover your app in a new way, with minimal commitment necessary. The hope is then that users download your full app and become a loyal customer.

With this perspective in mind, I’m surprised Apple didn’t integrate App Clips into the App Store and bill them as samples. Similar to how you can download free samples of titles in Apple Books, then purchase the full title in a seamless process, App Clips could provide a nice taste of whether an app is for you or not. Getting to experience an app’s core functionality and UI with no annoying account creation or login screens in your way would be great. I’ll be interested to see if Apple moves this direction in the future. 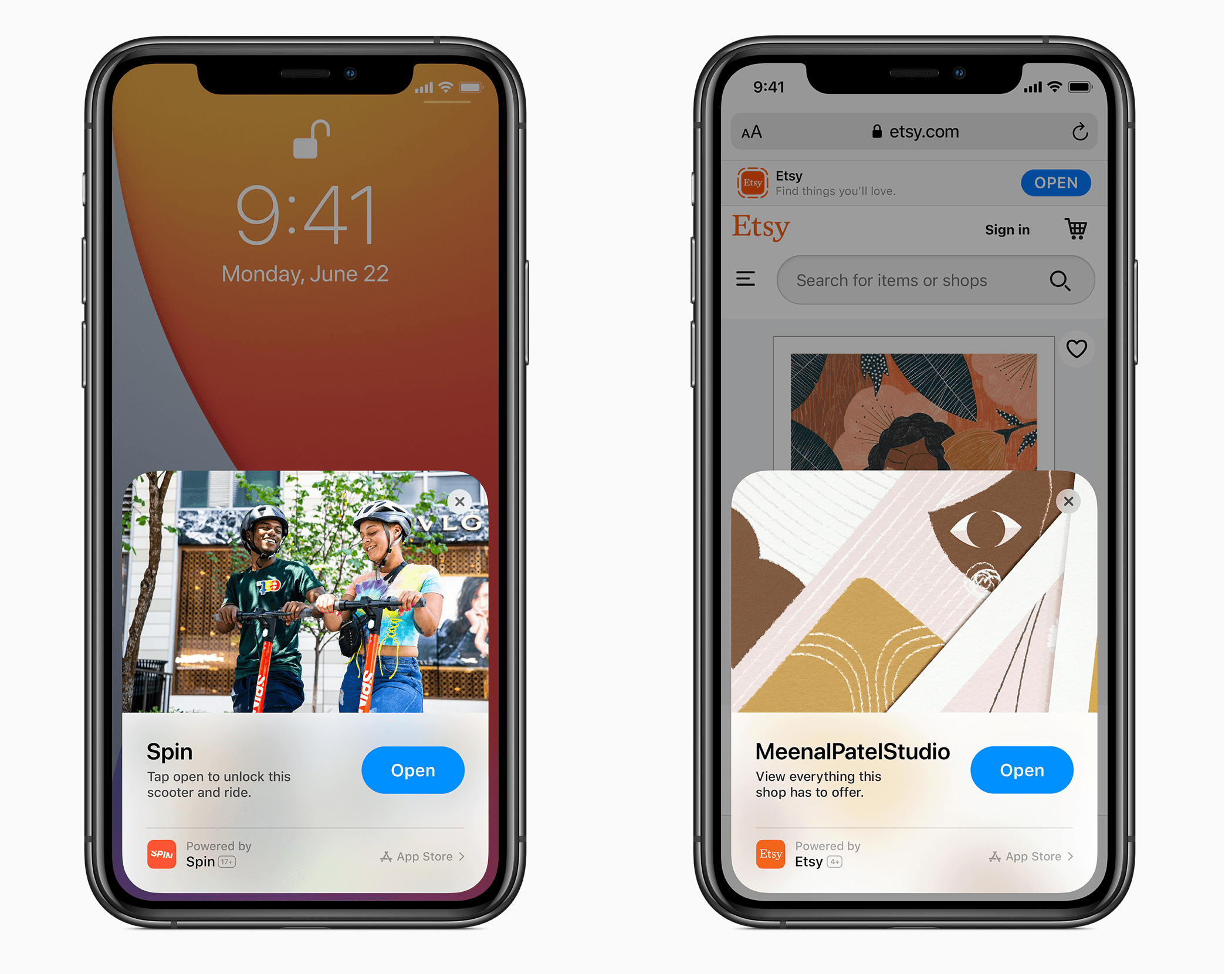 Etsy (right) is an example of an App Clip designed for sharing.

There are a variety of other interesting details about App Clips worth noting.

System requirements. All iPhones running iOS 14 will support App Clips, but the experience with NFC tags will vary based on the model in use. Newer devices, like the iPhone 11, 11 Pro, 11 Pro Max, XS, XS Max, and XR, can read NFC tags automatically. With the iPhone X, 8, 8 Plus, 7, and 7 Plus, users will first need to turn on NFC scan mode from Control Center before NFC interactions will work. Apple’s documentation isn’t clear on where the iPhone SE stands.

Frequent use. Normally an App Clip is intended for a single transaction at the time of use, so iOS takes care of clearing its data from your device some time after you use it. If you use the App Clip regularly though, and don’t download the full app, iOS will learn to keep the App Clip saved on-device and may even start suggesting it in the Siri Suggestions found in Search and the new widget. 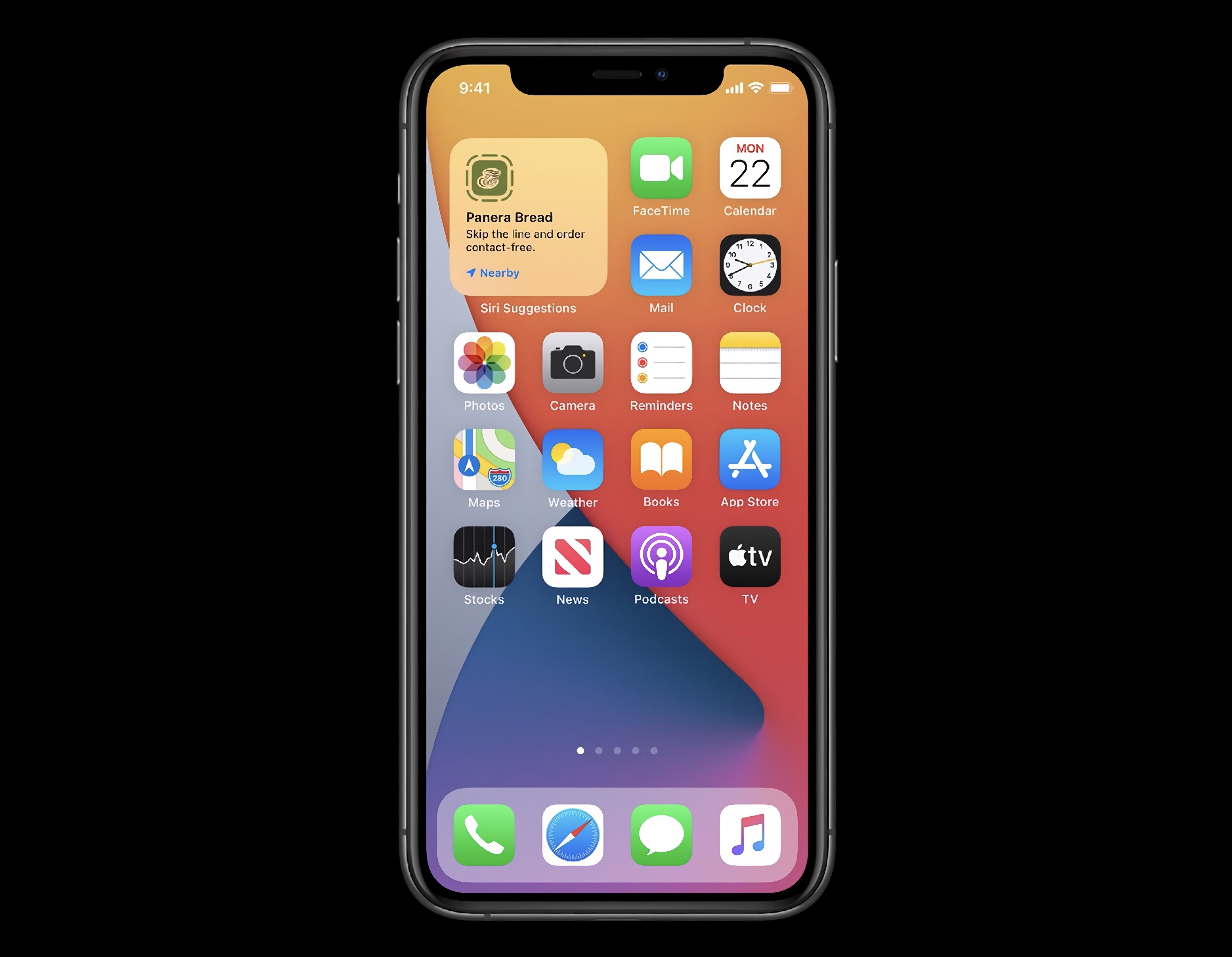 App Clip unnecessary. If you find yourself in a situation where you access an App Clip, perhaps via an NFC tag, and that App Clip’s full app is already installed on your device, tapping the Open button will open the full app rather than the App Clip. If everything works right, you should be taken to the part of the app on which the App Clip is based, offering the exact functionality you were looking for despite being in the full app.

When iOS 14 releases today, many of its features will be immediately available to all users. Widgets will be brand new and able to live on the Home screen, iPhones will be able to do Picture in Picture video for the first time, and there will be lots of updates to built-in apps across the system. Many third-party apps will be ready with new widgets and support of fresh iPad app designs. On day one we’ll start getting a sense of which new features are a hit with the masses and which fall a little flat. App Clips, however, will take significantly more time to measure because their success or failure depends on physical businesses’ adoption.

The number of businesses that create App Clips and feature them in physical locations is anyone’s guess. App Clip Codes not being available until later this year is unfortunate since they provide the best experience for users, so hopefully Apple can get them into businesses’ hands soon. But in any case, it may be quite a while before the average user encounters an App Clip out in the world.

If App Clips do take off, they should serve as a seamless way to complement physical experiences with digital convenience. And who knows? Maybe in a couple years we’ll have AR glasses to make discovering and interacting with App Clips even easier.

App Clips are a bold play for the future, but we’ll have to wait a while yet to learn their fate. Will they become ubiquitous, or end up a failed experiment? Only time will tell.

You can also follow our 2020 Summer OS Preview Series through our dedicated hub, or subscribe to its RSS feed.